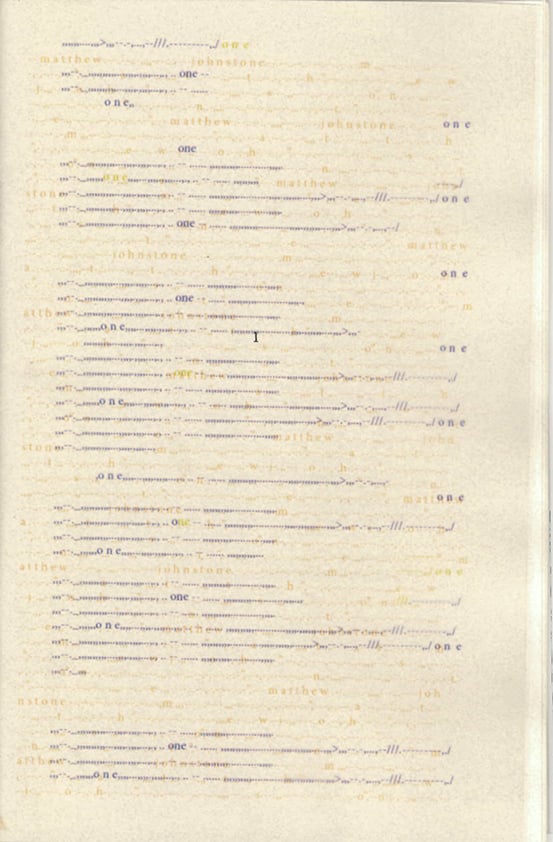 “Matthew Johnstone's o n e feels like a mystical text: the impersonal 'one' is invested with a simultaneous singularity and plurality, like the product of a deity torn between unity and entropy. As soon as 'one' resolves, it disperses again. In that way, it's wildly honest: Johnstone's movements toward firmness and meaning are generosities in the face of what his poems heedfully admit is a broken, but not unsalvageable, universal syntax."
—Dennis James Sweeney, Small Press Editor of Entropy

The oracular poems of o n e ponder the boundaries of agency, ownership, and isolation in our language and our selves. Words, faces, and histories are claimed, forgotten, rediscovered, coalesced, and inevitably cast into an unknown future. As taut and austere as it is effusively elaborate, o n e traverses a desert that may be its own oasis.

Matthew Johnstone places much of his poetry with online journals who provide free and entire, or mostly entire, access to the poetry they present. He is the author of Let's be close Rope to mast you, Old light (Blue & Yellow Dog, 2010) and the chapbook Note on Tundra (DoubleCross Press, forthcoming). He co-edits 'Pider (pidermag.com) and hosts the E t A l. poetry readings, both of Nashville, Tennessee.