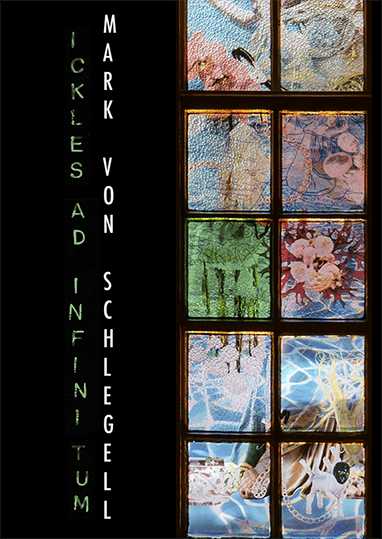 In the 2090s, Earth is somehow still here. Drones and clones are big business and Henries Ickles, debonair New Los Angeles infoarchitect, wants in on the action. Metaphysical theories are put into practice, invisible art is critiqued, quasicrystals are crafted, yogurt is spilled. From diplomatic misadventures with metallic herds in RealSweden to an underwater rendezvous in the free domes of MiamiVII, Ickles, ad Infinitum is a compendium of the exuberant and the abject, a refracted hologram of the absurdities of cultural production that swerves between incisive ode and knowing lampoon.

Mark von Schlegell has been pushing the envelope with independently-published experimental fiction and theory since the 1990s. He was born in New York, moved to L.A. in 2000, and currently lives in Cologne. His first novel, Venusia (Semiotext(e), 2005) was honor's listed for the Otherwise Award in Science Fiction.