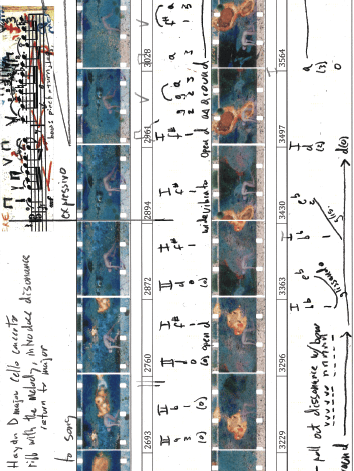 Created to accompany the closing event for filmmaker and artist Barbara Hammer's retrospective at the Leslie-Lohman Museum of Gay and Lesbian Art (October 7, 2017 – January 28, 2018), Evidentiary Bodies - Nudewalk collects the handmade score composed by Norman Scott Johnson for Hammer's performance at Microscope Gallery as an off-site extension of the Whitney's 2016 Dreamlands exhibition. Printed on vellum, this tonebook emphasizes the junction at which the ethereal and the concrete meet, with film strips hovering above collaged staff notation and handwritten notes. Of its provenance, Barbara Hammer writes:

Norman Scott Johnson and I met in an airport in Stockholm on our way to Oslo, he for a mini-vacation from his demanding work in architecture and I for a retrospective of my films at Kunsthalle Oslo. We became friends and hung out all weekend. On return to NYC I asked Scott if he’d perform his cello (multi-talent!) during my upcoming performance about living with cancer. We jammed! We laughed! We cried! Scott was willing to try anything! We saw ourselves paying homage to Charlotte Moorman and Nam June Paik. The performance has become a film which premieres February 2018 at the Berlinale.